Time moves so quickly! I’m so glad I made the plunge and started back to school when I did (I owe that nice “push” to my wife). It was a little scary (and still is) but my first full semester is officially complete. 6 hour down as I work towards my Doctorate of Business Administration (DBA). 6 hours doesn’t seem like much but with my transfer credits from my Master’s Degree, I now have 18 hours completed towards my DBA.

program, I must complete 32 hours of “core course” work. Similar to any degree program, there is defined core courses as well as your specialization or focus. With my 18 hours complete, I am 56% complete with my core course work. At this pace, I will complete all core course work by the end of Summer 2017! 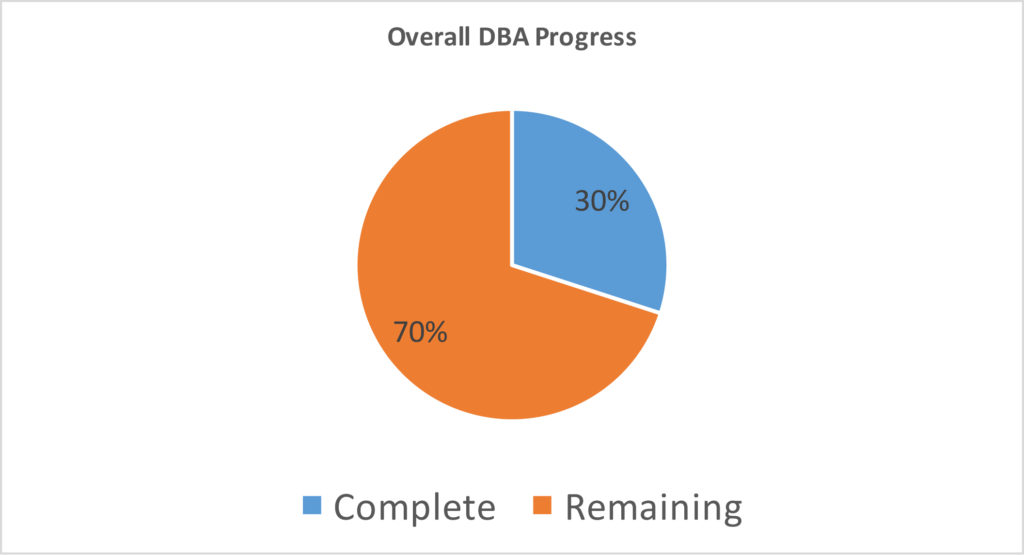 I hope you’ll continue to follow me through this process! Thank you for all the support!

See my first post about going back to school here.

I often think about innovation as someone who is working on a project or idea that is new or different. An innovator is typically thought of as being first; this would include being first to market with a product or the first to implement a new process. When I put that in context of what we have historically experienced in Corporate America, there seems to be a mis-match. That’s not to say that America isn’t innovating, but rather that Corporate American isn’t innovating.

Look at the some of the biggest companies in the 1900’s (Polaroid, Sears, General Motors); where are these companies today? Why did they fail to continue to succeed when they seemingly had such an empire at one point in their history? It’s really quite simple: they failed to continue to evolve, to grow on their strengths, to capitalize on new business opportunities. They failed to innovate.

In that context, what is innovation? How do we recognize it and what can leaders do to ensure their companies have a spirit of innovation? Let’s look at the difference in exploitation and exploration. Companies that are focused on the here-and-now, the short-term, tend to put all their efforts towards exploitation. O’Riley and Tushman (2016) define exploitation as the working towards efficiency, reducing variance, and focusing on productivity. Exploration, on the other hand, is accepting the variance, being inquisitive, and discovering newness.

Those big companies that failed to succeed over time were too focused on exploitation; they took the defensive approach and maintained market share in the short-term. Another way to say it: their leaders became lazy. They key missing from their potential success was exploration; they failed to look forward three, five, and ten years to attempted to hedge their business against the changing landscape. Rather than innovating by exploring new business for their organizations, they let the completion steal it from them.

How do organizations maintain success today while continuing to innovate? They must find the balance of exploitation and exploration. To truly accomplish this, you must dedicate resources to exploration. I’m not talking about establishing a Business Development group that is maintained within the existing framework of the organization; I’m suggesting that you build a subsidiary that functions completely independent of the parent brand. This subsidiary would have it’s own working capital and very different goals than the parent company. I believe this is the framework that will create sustainability for a brand.

Benson (2015) discusses the idea that, as leaders, we must share information with our team: “Your staff must know and understand why you are doing what you are doing” (Benson, 2015, p.58). Benson (2015) goes on to say that it’s even more important that we manage the meaning of the information we share out with the teams; we need to put it into context. Having the right level of transparency fosters trust and accountably within the organization’s culture (McNaught, 2013).

I believe the the right balance of transparency differs by organization. A mature organization versus an immature organization will require different levels of transparency. Transparency is all about being open and honest with both leaders and followers. It goes beyond simply sharing information at an organizational level; it about sharing positive and negative feedback within a team (Northouse, 2016). This is the foundation of a coaching culture. Having the appropriate level of transparency affords the team some level of buy-in; it’s makes them feel as if the decisions were made with each of them in mind. This approach yields influence to the leadership team.