How will you ensure that your child is using social media appropriately? 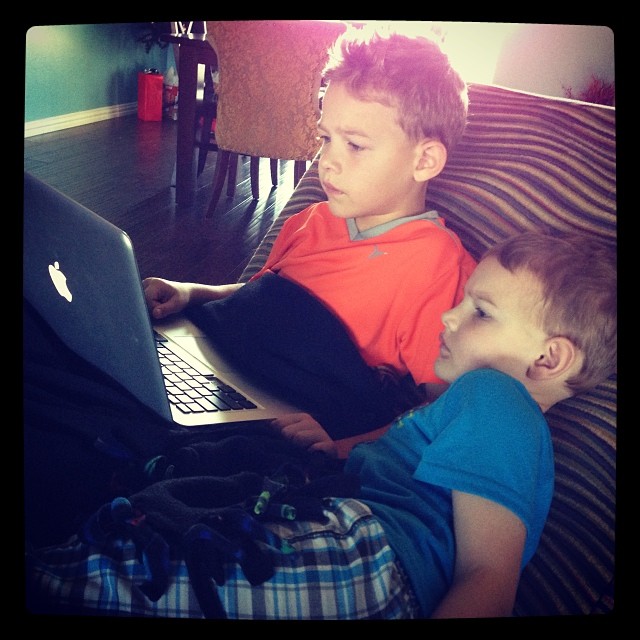 My kids use social media. Mostly due to the fact that my wife and I are active is the social sphere. I am a contributor on social media, meaning, I generate content on a regular basis and publish for the world to see. My wife, in contrast, is a consumer, meaning, she rarely publishes content but rather absorbs content that others are creating. I distinguish between these two types of users because it’s important to note that your child will not only be publishing content for others to see, but they will also be viewing and absorbing content from those within their friend pool.
With all this activity on the various social sites, how do we as parents monitor and protect our children? At our house, we have put a few basic ground rules in place that apply to all social media activity.

As your children become active on the various social media sites, it’s important that you monitor their activity and conversations. It’s also important that you, as the parent, are familiar with the various social platforms; this doesn’t mean that you have to be a power user but at least know enough about the platform to understand the implications of using the social tool. I encourage you to create an account on all the social platforms that your children have access to.

Because there are so many different social sites to monitor, it might be helpful to leverage a social aggregation tool to pull all of your children’s conversations across the various social platforms into one location. In order to do this, you will need to have full access to their accounts (another reason why rule #1 is so important). It’s important for you to login with their accounts specifically because a lot of the social sites allow direct messaging that bypasses the public realm; without full access, you will only see the content and conversations that are public.
Here are a few social aggregators that you might consider (some are free, some are not):
Regardless of how you monitor your children’s use of social media, the most important thing to remember is to monitor it.
These are the rules that we follow in our house. They are not foolproof and they may not work in your situation. You need to find what works for you and your kids. My hope is that some of these ideas will help you find the right approach to social media in your household.

Regardless of industry, every organization will have a crisis at one point in their lifespan; it is inevitable. For Toyota, that crisis hit as they had matured and were at the peak of their sales and market share in the United States. The product-harm crisis they encountered crippled their business. In this paper, I will discuss the definition of product-harm, set the stage for Toyota’s recall and make a recommendation regarding how the firm could have responded differently to the product-harm crisis.

Product-harm is defined as product that is found to be defective, harmful or dangerous (Ma et al. 2014). Most often, we consumers learn of product-harm situations because a brand has come forward and announced that they have an issue with a product, and it is now being recalled. Brands typically learn of these issues as their customers begin notifying them of potential defects; if the defect causes bodily harm to the consumer, there will likely be some form of legality or legislation involved which heightens the awareness of the issue with the brand’s product (Cleeren et al. 2013).

To bring our definition of product-harm to life, we will evaluate the case study of Toyota and their recall of over eight million vehicles.

Toyota’s reputation for quality automobile manufacturing was widely known throughout the world. Toyota, and its subsidiary brands, produced vehicles that were made with the utmost thought and precision; they made vehicles that would last the test of time. To accomplish this goal of manufacturing great automobiles, Toyota employed a process known as Kaizen; this is defined as “the daily and ongoing process of continuous improvement through the elimination of waste in the workplace” (Flaim, 2007).

Because of this glowing reputation for producing great automobiles, Toyota began to take-hold of the US automobile market share. While it did take them about forty years to gain a substantial share of the market, they began growing that share rapidly in the early 2000’s, peaking at just over 14% of US automobile market share. At this point in history, Toyota was well positioned amongst its competition with a great brand, high-quality products, and strong financial performance.

As Toyota was in full stride, hitting the top of their company performance, crisis fell hard on their company. This crisis was nothing short of catastrophic for the brand as they were forced to recall over eight million vehicles worldwide. The primary issue stated in the recall was the accelerator pedal sticking, causing the vehicle to continue to accelerate out of the ability for the pilot to control. This recall put their organization into a tailspin; they began suspending sales on eight vehicle models, production factories were closed, and lawsuits poured in. (Rajasekera, 2013).

While this was not the first recall that Toyota had been through, it was certainly the first of this magnitude. Not only was it great in magnitude because of the number of vehicles impacted, this recall experienced the largest reach in terms of existing and potential customers due to the technology of social media. Never before had an automobile manufacture dealt with a large recall with the looming media reach that social media platforms provide (Facebook, Twitter, etc.). Because there was so much media focused on the Toyota recall, the current president of Toyota, Akio Toyoda, took to the public forum by apologizing for the quality issues the brand was having; in his prepared remarks, he focuses on three points: safety, quality, and volume (Associated Press, 2010). The reactions began flooding in as consumers began to question the sincerity of President Toyoda’s comments.

Knowing how highly public the recall was, Toyota should have taken a different approach with their announcement. Understanding that President Toyoda was a highly educated and capable individual, that does not qualify him as a great communicator. After having watched the video of him addressing Congress, you can clearly see why the brand had such a negative response in the social channels.

Looking at the scenario in hind-sight, my recommendation would be to have a trained public speaker from within the Toyota organization (likely in the Public Relations department) speak on behalf of their president. This would have been a proactive approach and would have been done prior to the congressional hearing in an attempt to set the tone of the message in a more apologetic and sincere framework. In addition to broadcasting that message across the various media outlets to pick up, Toyota should have created a strong social media campaign that combatted those negative conversations happening throughout the various networks. This tactic would not have stopped the chatter from occurring but rather allowed Toyota to have a stronger and more positive voice in the conversation. Chen, Ganesan & Liu (2009) argue that firms with a better reputation are less likely to utilize a proactive approach, but in the case of Toyota’s recall and in light of the congressional hearings, it would have been in their best interest to take a strong and proactive approach to this crisis.

Toyota faced a crisis that had the magnitude of bankrupting the organization; it was truly catastrophic in nature: more than eight million vehicles recalled. Toyota’s response to the community was appropriate in that they took responsibility and ownership of the faulty product. In addition to taking ownership, the firm took the necessary steps to rectify the issue: stopping production, correcting the product issue for the customer and communicating with the community. However, because this crisis was so large and impacted so many consumers, Toyota should have been more strategic with a proactive communication approach that informed the community of what was happening and what actions were being taken to resolve the issue. Toyota took steps in the right direction but failed to fully execute the proactive strategy.

Toyota and the rest of the manufacturing world have learned a great deal from this crisis. Toyota has recovered and is now a better automobile manufacture because of this crisis.

Well, I did it. I’ve made the plunge back into grad school. This time I’m in pursuit of a Doctorate of Business Administration (DBA) with a focus on Leadership. I’m honest about things … I’m a little nervous. This is a big deal and a lot of work to add to my already busy life (I know, you guys are just as busy as I am).

Why go back to school? I’ve spend some time thinking about that:

I have a hunger for knowledge. It’s not just the idea of gaining knowledge but rather taking that knowledge and applying it to a problem or task that I may have. In my current role at work, I am constantly put in a position where I am asked to solve a problem without having any clear guidance or direction on how to accomplish or solve the problem. Some may find this daunting, but I love it. It challenges me to think outside of my normal field of ideas; to find and leverage resources that I never thought I would utilize. To be frank, it’s exhilarating.

This exhilaration is a thrill for me. Perusing my doctorate in Business Administration is a thrill and a challenge. The skills that I will gain in this program will help me both in my personal life and in my career as I continue to tackle problems and challenges head-on.

The business world is becoming increasingly more complex. By earning my DBA, I will be equipped to pursue and overcome these pending business complexities; I will be the catalyst, driving change in my community, my organization and the vertical in which I work.

“Fear forces you to prepare more rigorously and see potential problems more quickly”; this was a line written by Adam Grant in his book Originals (if you haven’t read this book, I highly recommend it). Do I have fear about starting this journey? Absolutely; I am terrified. Rather than being paralyzed by this fear, I will leverage it to ensure that I am prepared and ready to tackle anything that comes my way.

Join my on this journey.